Young Couple Return to School After Listening to ‘Our School’

Mboriundo Daniel Muabi, 26, has two daughters, aged 2 years and 6 months, respectively. He is married to Angelina, 25 years, and they live in Kpotonayo Payam of Tambura County, Western Equatoria State. 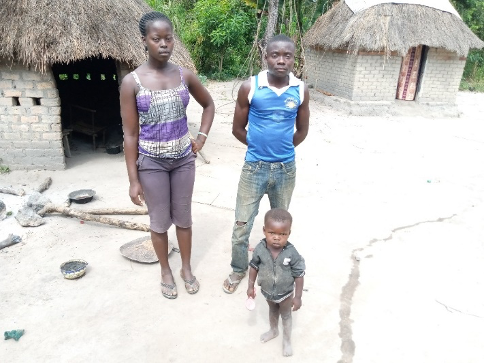 Daniel and Angelina began their relationship when they were both in primary school. He was 21 and in primary 7 while Angelina was 18 and in primary 5. Angelina fell pregnant and her parents sent her packing to the boy’s family. They both dropped out of school and settled down as husband and wife. As young parents, they faced a lot of challenges, “We did not know how to take care of our children when they fell sick and did not have a good source of income to support our small family”, Daniel explained. They thought that they would never get a chance to go back to school.

One day, a GESS community mobilisation volunteer (CMV) brought a solar wind-up radio loaded with ‘Our School’ radio programme episodes and started a listening group with Daniel’s family. It was then that they understood that even people who dropped out of school can go back to school. One of the episodes focused on young mothers and this resonated with the young couple.

“We were inspired by the story of Jackline who re-enrolled at Big Ben Secondary School after giving birth to four children,” Daniel said. “I cried when we listened to the episode on that day. Afterward, I decided in front of my father that both of us should go back to school.” Daniel wants to pick up from where he left off and hopes to become a teacher, whilst Angelina would like to become a midwife. They have decided to delay having more children until they complete their studies. Daniel’s brother is willing to support them with school requirements.

Daniel appreciates the people making ‘Our School’ for changing his perception of school dropouts and for encouraging him and his wife to go back to school. He commends GESS for supporting them in realising their potential and now hopes that his family’s future looks bright because of education.