We spoke to Senior 4 learners in Juba, asking them which biases they would like to break. This is what they had to say… 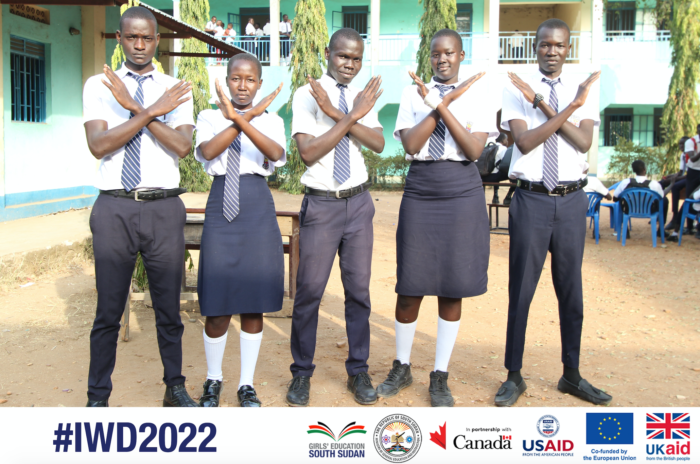 “I want us to break the bias of victimizing women who report GBV (gender-based violence) cases.”

“I would like to break the bias of considering the post of head prefect for only men.”

“I want to break the bias in inheritance in our society whereby men are favoured to inherit resources such as land.”

“I would like to break the bias in employment opportunities as men are favoured in terms of employment.”

“I want to break the bias of considering women to be inferior.”

As a result of attitudes towards girls at home and in schools, girls tend to behave and act more in accordance with certain prevailing gender norms and roles and grow up to internalise them. These pressures and expectations lead to many girls in South Sudan dropping-out of school early, which limits their educational opportunities. Such reasons for drop-out include early and forced marriage, early pregnancy, and taking on a large share of household responsibilities. 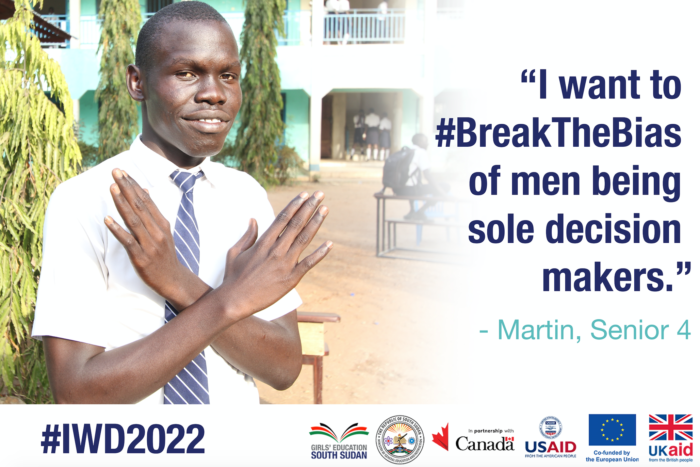 To stop the perpetuation of negative gender stereotypes at school, as well as to address its existence in the society at large, initiatives to promote gender equality in and through schools are imperative. Schools have enormous potential to effect change in gender relations, views and practices, and create a gender-sensitive and gender-equal generation of men and women.

GESS’ radio programme, ‘Our School’, is broadcast across South Sudan. ‘Our School’ follows the lives of girls and their families as they strive to resolve the challenges of going to school. These on-air role models act as positive examples, encouraging listeners to denounce negative gender stereotypes at school and at home.

Three of our ‘Our School’ radio producers are women. Apart from journalists and editors, other roles within media production, such as producers, technicians, sound engineers, and camera-operators are invariably male. We hope that, through encouraging strong female voices on the radio, more individuals will be inspired to #BreakTheBias.

Collectively we can #BreakTheBias, creating a world free of stereotypes and discrimination. A world that is equitable and inclusive.

To listen to a selection of ‘Our School’ radio programme, go here.