“They need to be encouraged”, says Community Leader, Nyuon Goyok, with a determined look on his face.

Nyuon has been a Community Leader in the Protection of Civilians (PoC) camp in Bentiu in Unity State since 2014. “Since the outbreak of the crisis in 2013 many girls have lost hope. Families are not making enough money to support their girls. The families feel that if the girl is married earlier then they can get some money.” The result of these early marriages is that “we are even seeing pregnancies at the age of 12 and 13. Most of the time this is because of the crisis and poverty.” 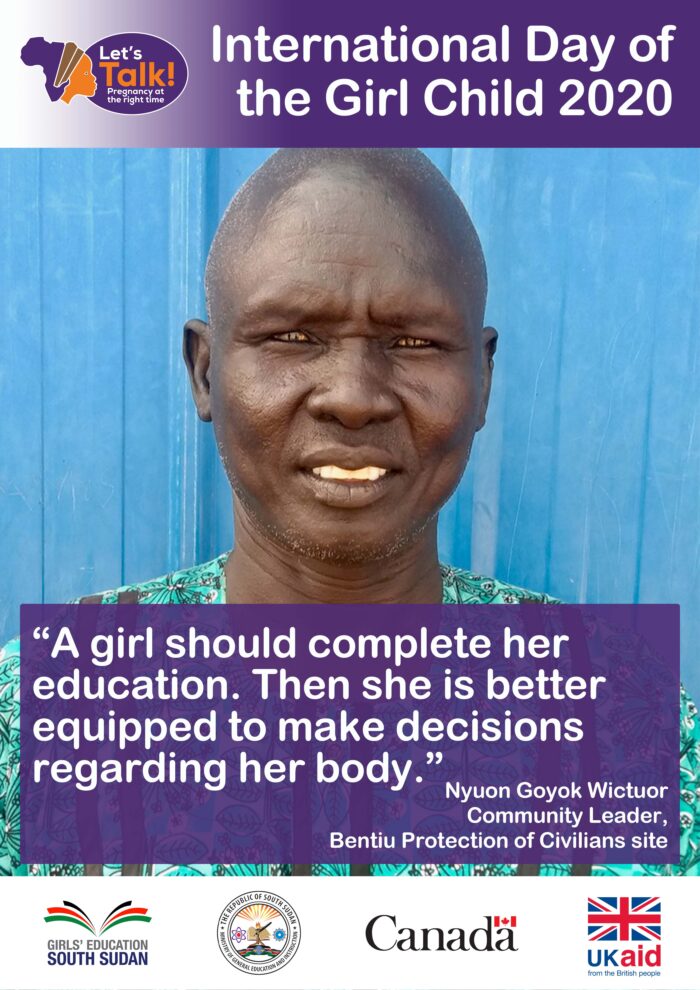 Adolescent pregnancies are a global problem but occur most often in poorer and marginalised communities and the issue is widespread in South Sudan. Many girls face considerable pressure to marry early and become mothers while they are still a child.

But imagine a South Sudan where all adolescents are empowered with the knowledge, information, agency and support to prevent early and unintended pregnancy and reach their full potential. The “Let’s Talk!” Campaign is a multinational response to the crisis of early and unintended pregnancy (EUP). On this internationally recognised day, we are calling upon communities, parents and governments to commit to helping to reduce and prevent EUP and to afford girls who fall pregnant an opportunity to continue with their education.

Nyuon is one of our “Let’s Talk” Champions – he is committed to preventing and reducing EUP through creating space for men, women, girls and boys, to talk to each other and really hear each other’s perspectives, grappling with the core issues around EUP. Community Leaders are systematically reaching out to communities in the PoC through block-to-block awareness campaigns. “We are raising awareness in the community – that girls should go to school and that early marriage and pregnancy is to be discouraged. A girl should complete her education and then the girl will have the decision to get married once she is better equipped to make decisions regarding her body.”

This is taking place in the form of group discussions, raising topics such as the value of an educated girl. Messages are spread through local radio talk shows and through pre-recorded radio programmes that are loaded on to solar-powered wind-up radios and aired during community meetings. Community members are then afforded time to openly discuss the topic at hand. 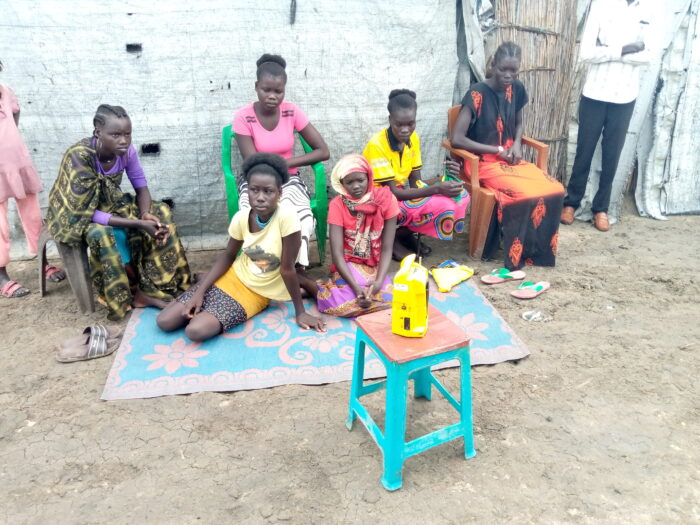 Nyuon believes that first-hand experiences and examples are the most powerful form of change, as they allow individuals to easily relate. “The community reacts positively because they have seen the benefit of an educated girl. We have seen an increase in girls in the upper primary classes. Some community members are even creating their own groups to advocate against early marriage and early pregnancy.”

“Since coronavirus, many girls have become pregnant. Some have left (the camp) to go to the village or cattle camps. When schools were operational there was control over early pregnancy. Girls were focusing on school.” COVID-19 disrupted life in the camp, but community mobilisation continued, and communities have stayed engaged. Although community meetings had to stop due to health and safety measures, radio talk shows have increased and Nyuon embarked on a door to door campaign to deliver the solar-powered radios to families across the camp. This allows important messages to reach communities in a safe way – families can listen to radio programmes from the safety of their homes.

“We need more community mobilisation – talking to parents one-on-one and through group discussion. The (solar-powered, wind-up) radios are currently not enough. If we have more radios to give to the communities then they’ll listen to the Our School programmes. We’re seeing these programmes have an effect. Block-to-block support is also working and should be done more often. If we could also carry these messages on ‘boda bodas’ (messages delivered through a loudspeaker attached to a motorbike), then I think we could see more impact.”

“What I can encourage to all the youth across the country is they can support their sisters to go to school. It’s her right. If a girl gets pregnant at an early age, then there’s the risk that she won’t go back to school at all. Boys should also be encouraged to play their part. If you get a girl pregnant, you could also be uprooted from the school. It will not only change the girl’s life, but yours will change as well.”

It’s a powerful message of accountability. We all have a duty of care to look after our girls and protect them from early pregnancy and early marriage. Honourable Undersecretary of the Ministry of Gender, Child and Social Welfare, Esther Ikere, highlighted this point, “We need to support the Government of South Sudan to end child marriage. We know that among the countries in Africa, South Sudan is amongst the highest (rates of child marriage). There’s a high level of political will to end child marriage by 2030. We call upon parents and communities to respect the laws of the land and to help us reach our targets.”

“Once we push our daughters to early marriages, we have contributed negatively in terms of health, personal development, career and educational attainment. I’m encouraging women in positions of power to be role models in their communities, to do a lot of awareness creation amongst family members in their communities and then they can imitate what we are doing. They (girls) will aspire to become leaders for tomorrow.”

Our School radio programme is tackling the issue of early and unintended pregnancy. A selection of radio programmes can be found on our website, here.

If you would like to listen to one of the radio programmes in Juba Arabic, or a different local language, please do get in touch with us here.