Today is World Radio Day. Under the theme, ‘New World, New Radio’, the day highlights the continuing importance and evolution of radio in today’s world. It is the most prevalent form of media in South Sudan and continues to be used as an important tool for change.

GESS’ solar-powered and wind-up radios reach some of the hardest to reach communities in remote rural villages with positive messages on girls’ education and empowerment. The following story highlights the wonderful potential of radio.

Justin Baraka is a 39-year-old father of two, a girl of 16 and a boy of 7.  He is married to Yunis Alfred, 35, and they live in Manikakara Payam of Ibba County, Yambio. Both his children are attending school.

Justin’s daughter is a GESS cash transfer beneficiary. Whenever Justin heard that his daughter had received the payment, he would request some of the money. “I used to force her to give part of the money to her mother so that it can help us because we are poor. I also used some of that money for drinking alcohol with my friends,” he explained. “I used to take money away from my daughter because of ignorance and I did not bother to understand what the cash transfer was meant for.” 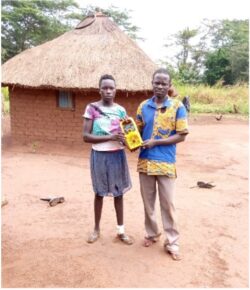 Justin with his daughter

It was only when a GESS Community Mobilisation Volunteer (CMV) brought a solar-powered radio to start a listening group with his family that he began to understand the impact of his actions on his daughter’s education. The radio was loaded with a PSA on CTs and some ‘Our School’ episodes, one of which also focused on CTs.

“In the past, we didn’t know about these radio programs but listening to the radio episodes has corrected my thinking and now I know why the money is being given to our daughters,” Justin remembers hearing from the radio that CTs are for buying school materials and that parents and teachers should not take the money away from the girls. “I now fully support my daughter and I always advise her not to spend the money on things other than school materials or sanitary pads.”

To listen to a selection of Our School radio programmes, go here.

The social and behavioural change component of GESS is supported by Consortium Partner, BBC Media Action.

The GESS programme receives £70 million (GBP) of UK aid from the UK Government and $19.2 million (CAD) from the Government of Canada through Global Affairs Canada. The Ministry of General Education and Instruction (MoGEI) leads the GESS programme, supported by implementing partners who provide technical advice. GESS is managed by a consortium led by Cambridge Education/Mott MacDonald, including BBC Media Action, Montrose, Leonard Cheshire and Windle Trust International.